ALL passwords will need to be reset on Monday September 26th. 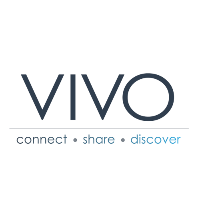 This documentation relates to an old version of VIVO, version 1.10.x. Looking for another version? See all documentation.

You can modify the "Research," "Faculty" and "Departments" sections of the home page, as well as expand the map section to include country-specific and state or province-specific maps.

The code below is from the page-home.ftl template and shows how the macros are referenced. So, for example, if you wanted to modify the order in which these sections appear on the home page, you would move the macro references accordingly.

It's possible that your VIVO installation has defined some of its own classes within the Research Class group. Cornell's VIVO, for example, has a Library Collection class and a Media Contributions class. If your installation does include its own classes in this group, you can display these in the Research section of the home page by modifying the researchClasses macro in the lib-home-page.ftl file. As shown in line 128 below, the classes that get displayed are hard-coded into the macro. Simply exchange the name of your classes with some or all of the ones below. You could also add your classes to the existing list. 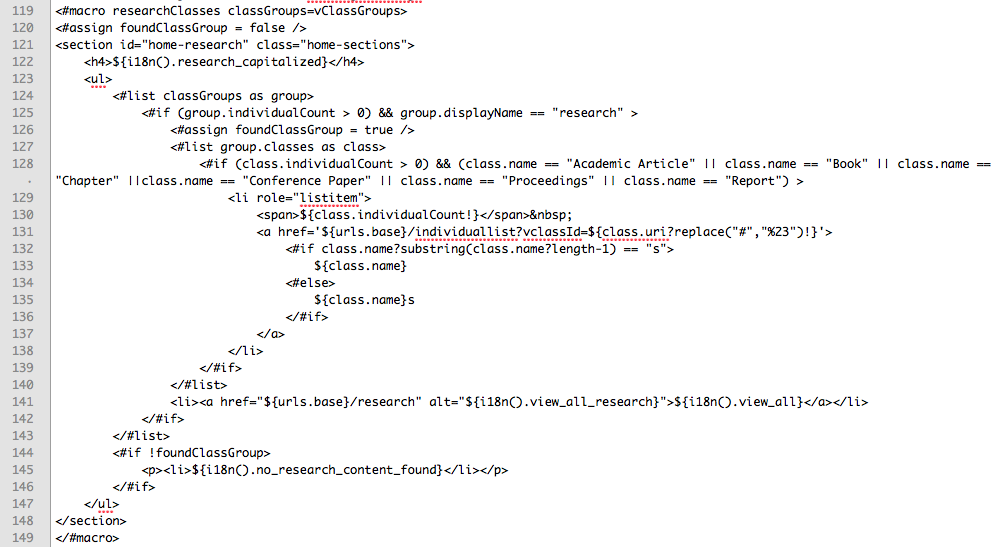 It would be possible to display a random selection of classes rather than a hard-coded list, the same way that the Departments section displays a randomly selected list of academic departments. To do this, you would have to copy the macros and java script used for the academic departments, and then modify it accordingly so that it displays research classes. Refer to The Departments Section below for more details.

There's very little customization that can be done to the faculty section of the home page, excluding css changes and relocating the section to another part of the home page. The one configurable piece is the number of faculty members that get displayed. This change is made in the homePageUtils.js file. Locate the getFacultyMembers function and modify the pageSize variable (shown in line 29 below).

The list of academic departments is a randomly selected list that relies on a data getter as well as two macros in the lib-home-page.ftl file.  The data getter is defined in the homePageDataGetters.n3 file. If you want to display something other than academic departments, you need to update the SPARQL query portion of the data getter, shown in lines 18-30 below. Substitute the class you want to display for vivo:AcademicDepartment.

It is possible to expand the query to include more than one class. To do so without having to make any other macro or template changes, use UNION clauses in your query, as follows:

The following code snippet shows the two macros used to render the Departments section.  If you change the data getter to use a different class, you do not have to change any variable or macro names. The only change you'll need to make is to the heading of this section so that it correctly reflects the class being displayed. Line 155 (below) is where you would make the change. (Note the use of the internationalization variable. As part of your change, you may want to update the i18n/all.properties file to include your new section heading. 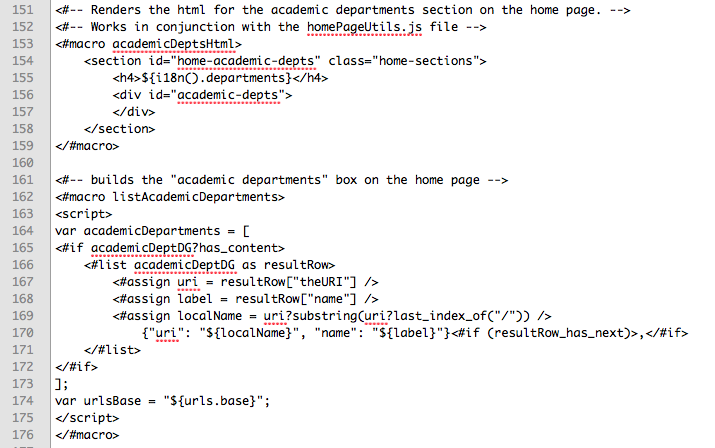 The new map on the home page uses circular markers to show the countries and regions that researchers in a VIVO installation have chosen as their areas of geographic focus (vivo:GeographicFocus). Clicking on a marker takes the user to that country or region's profile page, which shows the list of researchers in that location. The map is built using the Leaflet.js java script library, map tiles provided without charge by ESRI, and geographical data stored in a JSON file.

The map is enabled in the runtime.properties file. Include or uncomment the line:

How the Map Works

When the home page gets loaded, three java script files relating specifically to the map are sourced in: leaflet.js, latLongJson.js and homePageMaps.js. The first is the java script library that does the actual map rendering, from sourcing in the map tiles to placing the markers on the map. The second file contains a JSON array containing geographic data such as the names of countries and regions, their latitude and longitude, and some additional information that is used to build the GeoJSON object. The last file, homePageMaps.js, contains the functions that serve as the driver for rendering the map. The following outline covers the sequence of those events.

1)  The getGeoJsonForMaps() function uses an AJAX request to call the GeoFocusMapLocations.java class. The purpose of this class is to run the SPARQL query that retrieves the names of the countries and regions that researchers have selected as areas of geographic focus as well the number of researchers associated with each area.

2)  Once the SPARQL query results are returned to the getGeoJsonForMaps() function, it then parses the results and uses several function calls to build the GeoJSON array that gets used by the Leaflet java script. For example, the getLatLong() function call gets the longitude and latitude of a geographic area from the latLongJson.js file.  The GeoJSON array, which is stored in a variable named "researchAreas," takes this format:

3) Once the researchAreas variable is set, the buildGlobalMap() function is called. The main portion of that function is shown below: 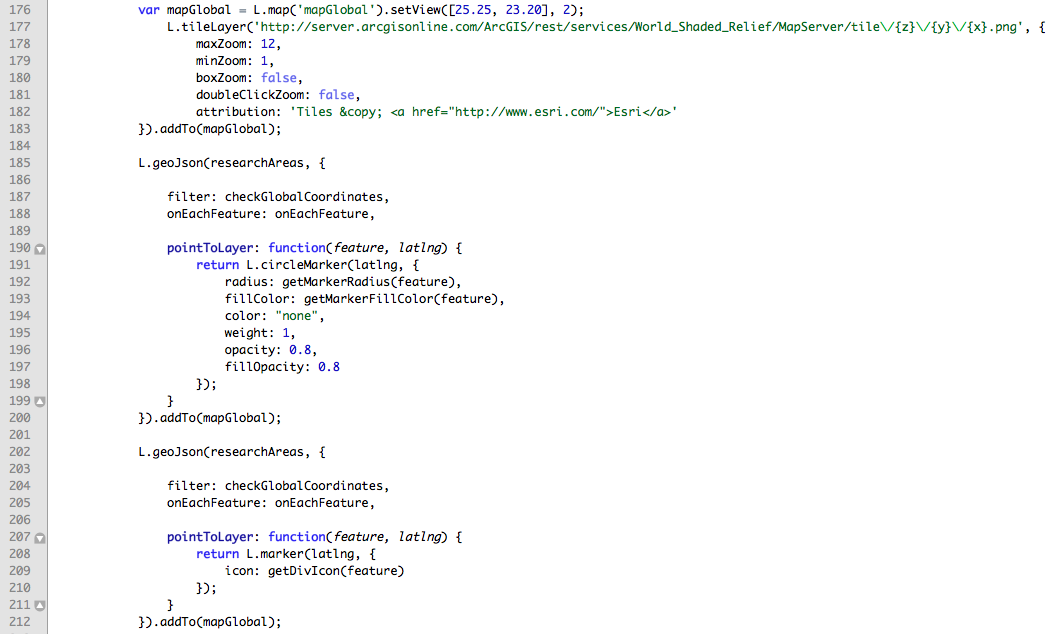 Here are some key points to note about the previous code:

As noted earlier, the lib-home-page.ftl file contains the macros that are used to build the new sections on the home page. Here is the geographicFocusHtml macro: 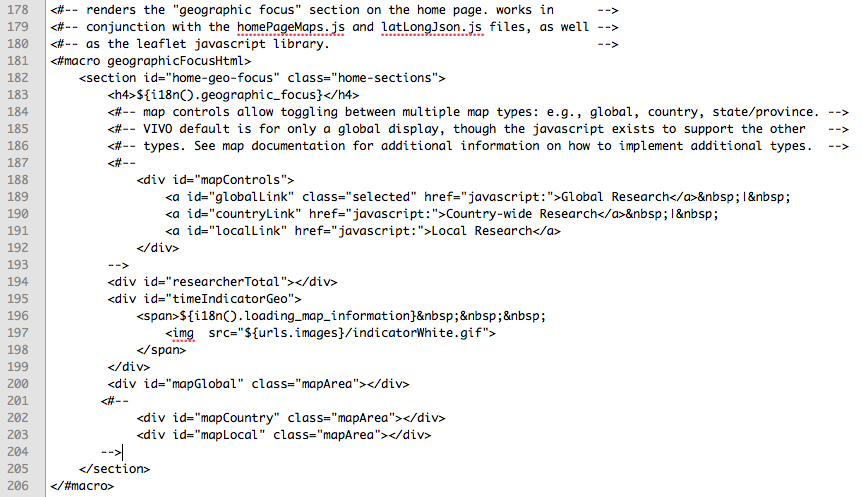 Note line 200: this is the <div> element where Leaflet renders the map.

Customizing the Look of the Map

There are three principal ways to customize the look of the map:

Change the source of the map tiles

This is the most significant modification that you can make. The map currently uses tiles provided by ESRI, which has other map tiles for you to use. Mapquest is another source of free map tiles, as is Google. OpenCloud is a source of map tiles but they charge a small fee.

To change the tiles, you need to update the L.tileLayer definition in the buildGlobalMap() function. This is shown in line 177 above. Simply change the URL to the URL of the service providing your map tiles. (That service may also use a slightly different API.)

Change the colors of the markers

You can change the marker colors in the getMarkerFillColor() function in homePageMaps.js. Note that there are separate colors for countries and regions. If you do change the colors of the markers, you will also have to update the legend that appears in the lower left corner of the map. The circles in this legend are actually image files ( map_legend_countries.png and map_legend_regions.png), so you will have to create new image files to match the colors you have chosen for markers.

Change the size of the markers

The size of the markers is the value that is set in the "radius" property in the GeoJSON array. This value is actually calculated in the GeoFocusMapLocations.java class. You can either update this class or add a new function to homePageMaps.js and modify the radius value in that java script file.

Enabling the Country and State/Province Maps

Currently, the home page map section only shows one map view: a global view with markers displayed for regions and countries. However, the code is available to include two additional views, one for a specific country and one for a specific state or province within a country. These are the steps you need to follow to implement the other two map views.

If you are using multiple map views, than you need to uncomment the mapControls <div> element in the geoFocusHtml macro (<div id="mapControls">). If you are only implementing two views (global and country), then you will want to ensure that the "localLink anchor tag is commented out (<a id="localLink" href="javascript:">). These anchor tags, along with corresponding java script in the homePageMaps.js file, allow the user to toggle between the implemented map views. (No change to the js file is necessary.)

Update the coordinates in the setView() function

The coordinates above,  [46.0, -97.0], center the map on the United States. If you want this map to be centered on a different country, you will have to change these coordinates accordingly.  The third value in the line of code above, 3, is the zoom value and sets the default for when the map is loaded. Note that the default zoom value for the global map is 2 and the default for the local map could be any thing from 4 to 8 depending on the location you are displaying.

For all three types of views, the map includes summary text that shows the total number of researchers and geographical areas in the results, as show below:

Depending on the map views you implement, and the actual country or areas they display, you may want to modify the wording that gets displayed here. This is done in the getResearcherCount() function in of the homePageMaps.js file. (Note that the text here uses internationalization variables, so you may need to update the i18n/all.properties file as well.)

Note that the mapType corresponds to the map view, in this case "country" as opposed to "global, while the geoClass corresponds (loosely) to the VIVO ontology class. ("Loosely," because the class is actually "StateOrProvince.")

Implementing a state/province map would mean updating the latLongJson.js file to include data for the geographic areas within a state. For U.S. states, examples would include counties, townships and even more general areas such as the Hudson or Mohawk valleys in New York (two areas of geographic focus for Cornell researchers). In this third case the mapType must be set to "local."

Update the SPARQL query in the GeoFocusMapLocations.java class

If you want to implement a state/province map, you may need to update the query further to ensure that the local geographic areas are included in the query results. Although there are VIVO classes for counties and "populated places," your VIVO installation might have additional refinements to the ontology.

Update your VIVO data as necessary

The SPARQL query in the GeoFocusLocations.java class does not simply return a count for the numbers of researchers that have selected a country (for example) as an area of geographic focus. The query also roll-ups the counts for "child" locations into the "parent" location. For example, if 5 researchers have the U.S. as their area of geographic focus, and another 5 researchers have individual states as their focus, the query will return a count of 10 for the U.S. This is accomplished through the vivo:geographicallyContains object property. Similarly, country counts are rolled up into regional counts through the geo:hasMember object property. It's possible that you will need to curate your VIVO data to ensure that the necessary object property relationships exist in your installation. This is especially true with the local geographical areas.