MTOM Support on the WSDL Level

MTOM Support on the WSDL Level

To enable MTOM, the slight modification of WSDL file is needed.

In other words, only new xml attribute expectedContentTypes from namespace with URI http://www.w3.org/2005/05/xmlmime is set to the value application/octet-stream.

There is little discrepancy between API-M WSDL definition of method modifyDatastreamByValue and it's web definition on (https://wiki.duraspace.org/display/FCR30/API-M#API-M-modifyDatastreamByValue). WSDL says attribute dsContent is of type byte[], but web says String. I suppose, the byte[] as the correct type.  (You're correct, Jiri. I've fixed the documentation. - Chris)

Since API-A and API-M wsdl files both use the include directive inside their <types> element, the changes will be made only to fedora-types.xsd.

MTOM can be enabled on both the client and the server side. If it is done on the client side, then the SOAP requests with binary data are "MTOMized" and if it is done on the server side, then the responses are. So far, it seems that either client or server (generated by CXF) can handle both MTOM (multipart/related) and non-MTOM (text/xml) SOAP messages in runtime without knowing in advance what type should be received. I am affraid that some old WS client won't be able to provide such a functionality, therefore new set of methods with MTOM support has to be created in order not to break backward compatibility wtih MTOM clients not understanding the MTOM/XOP coding. Another backward compatible solution could be for instance to return MTOMed message if and only if there is some special attribute in HTTP header of SOAP request, however, I haven't found how to change this behaviour of WS programmatically in runtime.

Also there might be some complication with this issue http://stackoverflow.com/questions/2808967/mtom-request-non-mtom-response.

All the solutions are backward compatible. 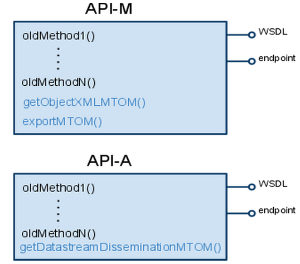 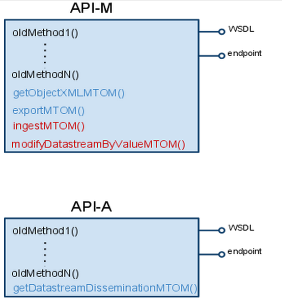 2. (the lower rectangles are MTOM enabled) 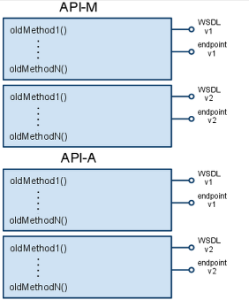 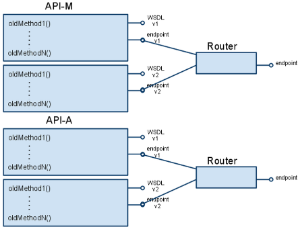 To be honest, I don't know. I would suggest the solution number 3. i.e. the router and new WSDLs, because it seems to me the best choice for possible future changes to Fedora's API. I had also some discussion with my friends which support this proposal.