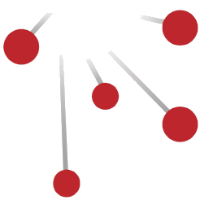 This documentation covers bleeding-edge updates to the 6.x version of Fedora. Looking for another version? See all documentation.

A named role, such as "writer", assigned to a user, a group, or some other identifying agent within the repository. Roles may be used by the policy enforcement point (PEP) to authorize actions taken in the repository.

A binary in a Fedora repository is a nonRdfSource Glossary#resource. In other contexts, binaries would sometimes be described as bitstreams or files. Binaries are always accompanied by a Glossary#nonRdfSourceDescription.

A computed fingerprint for binary content, used to ensure a complete transfer or the Glossary#fixity of stored information. Fedora supports the SHA-1 checksum algorithm by default, but can also support SHA-256 and MD5.

The resources that are immediate children of a given Glossary#container.  Properties are not children.

A container is a Glossary#resource that represents intellectual entities and can also be used to aggregate other resources in a Fedora repository. Containers may contain other containers or binaries and their nonRdfSourceDescriptions.

Datastream is principally a Fedora 3 concept.  Within the Fedora 4 model, the closest equivalent to a datastream is a Glossary#binary and its Glossary#NonRdfSourceDescription. Treat both together as a datastream; they only ever occur in a pair.

An approach available in Fedora 3 that allowed for binding a service from outside the repository to a content model or specific content type. Note: disseminators as such do not exist in Fedora 4 itself, but the API-X effort provides similar functionality by extending the core with specifications and optional machinery.

Fixity is a measurement or characterization of stored information at a given time, a reference to the stored information being 'fixed' or otherwise unchanged. Comparing two values of fixity generated at different times, such as comparing two checksums for a given binary file with one having bee generated before ingest to a repository and the second after ingest, provides a means to determine whether the information has changed.

Creating, modifying or deleting resources in the repository generates events. An (optional) indexer monitors and processes these events, such as loading RDF from Fedora to an external triplestore, for example.

The W3C Linked Data Platform (LDP) specification describes a set of best practices and a simple approach for a read-write Linked Data architecture, based on HTTP access to web resources that describe their state using RDF as the data model. Fedora 5 implements the LDP specification for create, read, update and delete (CRUD), allowing HTTP, REST, and linked data clients to interact with Fedora 5.

Managed External Content is content that resides outside of the Fedora 5 repository, but is managed by Fedora through a projection. Managed external content can be accessible via the Fedora API as well as have Fedora-managed audits.

A namespace is a container for a set of identifiers (also known as symbols, names). In Fedora 5, Glossary#resource properties may belong to any namespace. Namespaces are restricted to being an empty string or to a URI as defined in section 3 of RFC3986. An example of a namespace would be "http://purl.org/dc/elements/1.1/".

NonRdfSourceDescription (formerly the properties of a Fedora 3 Datastream)

This is a pluggable component in the Fedora framework that is responsible for authorizing all actions take on resources.

A predicate expresses a relationship between the subject and the object of a Glossary#triple.

Prefixes are limited to the following grammar:

The process by which a repository may present resources through the API that are actually stored in a different system, such as a file system or database.

Containers are defined by one or more rdf:types that describe the nature of the Glossary#container. Similarly, every property will be an instance of a single rdf:type. The official definition can be found here.

Resources are the primary organizational structure in the repository. A resource is any web-addressable entity, such as a container, a Glossary#nonRdfSourceDescription, or a Glossary#binary. Every resource is uniquely identified, its identifier representing a repository path. Resources are comprised of zero or more properties and/or child resources.

A tombstone is a repository marker indicating that a container, a Glossary#nonRdfSourceDescription, or a Glossary#binary used to exist at a given URL. A tombstone is created when a resource is deleted or moved.

A transaction represents a series of changes to the repository that must execute successfully and completely or not at all. Transactions are client initiated and should be used to ensure consistency. Each transaction succeeds or fails as a complete unit; it cannot remain in an intermediate state.

A triple is a fundamental building block of RDF. It consists of: a subject, Glossary#predicate, and an object. In this way, a triple can describe a relationship (via the Glossary#predicate) of the subject to the object. The official definition can be found here.

A string of characters used to uniquely identify a Glossary#resource. It is defined in RFC3986, section 3. An example of a URI would be "http://id.loc.gov/authorities/subjects/sh2002000192".

A universally unique identifier is a 36 hexadecimal number that is, for all practical purposes, unique (though there is an extraordinarily slight chance of a duplicate identifier being created in the future or already existing). It is used to identify a Glossary#resource.

A snapshot of a Glossary#resource that is saved in version history for later access.