The Resource Index is the Fedora module that provides the infrastructure for indexing relationships among objects and their components. Examples of relationships between digital objects include well-known management relationships such as the part-whole links between individual chapters and a book, and semantic relationships useful in digital library organization such as those expressed within the Functional Requirements for Bibliographic Records (FRBR).

Fedora expresses relationships by defining a base relationship ontology Fedora Relationships using RDFS and provides a slot in the digital object abstraction for RDF expression of relationships based on this ontology. Assertions from other ontologies may also be included along with the base Fedora relationships. All relationships are represented as a graph that can be queried using an RDF query language. The query interface to the Resource Index is exposed as a Web service risearch.

The Fedora object model can be abstractly viewed as a directed graph, consisting of internal arcs that relate digital object nodes to their dissemination nodes and external arcs between digital objects. The Resource Index is a Fedora service that allows storage and query of this graph. The Resource Index is automatically updated whenever an object is added or modified.

The Fedora base ontology describes such relations and properties as the behavior definition implemented, behavior mechanism used, creation date, state, and mime-type.

In the figure below, the graph (abbreviated for clarity) represents three objects in the repository. The object "demo:SmileyStuff" uses the Service Deployment "demo:dualResImageCollection", which in turn implements the Service Definition "demo:Collection". 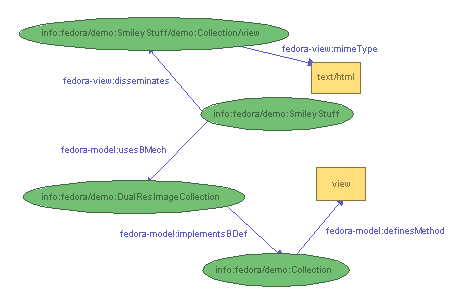 The Resource Index is configured within two sections of fedora.fcfg, module and datastore.

Here's another example, this time using MPTStore with immediate updates:

An explanation of the parameters and their possible values:

The example datastore configuration below (with the path parameter modified for the installation environment) would provide a local Mulgara triplestore that buffers up to 20,000 triples in memory at a time or waits for 5 seconds of buffer inactivity before flushing them to disk. Because writing triples to disk is a relatively expensive operation, the buffer takes advantage of Mulgara's bulk update handler to ingest a mass of triples at a time. The performance gain is significant during a bulk ingest of objects. The size or inactivity interval of the buffer may be adjusted according to performance needs and physical memory capacity.

An explanation of the parameters and their possible values follows. Certain parameters require other parameters, as indicated in the hierarchy below. Optional parameters are also indicated below. As noted previously, many of these parameters, with the exception of the pool, buffer, and flush parameters, cannot be changed on a running repository without a full rebuild of the Resource Index.

Instead of using the Mulgara instance embedded in Fedora a separate instance of Mulgara can be used, running in its own JVM (which can be on a different server). This may give performance advantages as the resources for the Mulgara JVM can then be configured separately from Fedora itself, and the data files can be located on separate storage.

Mulgara can be downloaded from the Mulgara download page.

Use the same version of Mulgara that Fedora uses - this can be determined from the libraries included in the Fedora web application, which will include a jar file mulgara-core.x.y.z.jar - use version "x.y.z" of Mulgara (it is possible to use other versions but this will involve updating the Mulgara and Trippi libraries that Fedora uses - and any dependencies). Fedora 3.3 uses Mulgara version 2.1.4.

An example datastore configuration for a remote Mulgara instance follows. The Resource Index module must be configured to use this datastore.

The parameters for this are largely the same as for a local Mulgara datastore; except remote is specified as "true", and host and port have been specified for the RMI connection to the remote Mulgara instance. The serverName parameter must match the server name that Mulgara is configured to use (by default this is "server1", the examples below configure Mulgara instead to use "fedora" as the server name).

The Mulgara website has documentation on starting and stopping Mulgara and on command line parameters.

An example command for starting Mulgara is

This configures Mulgara to start using ports 8088 and 8089 for the web user interface as Mulgara's default ports for the Web UI will conflict with Tomcat. Alternatively start Mulgara using --nohttp to disable the Web UI. The server name is specified as "fedora" to match the Fedora datastore configuration.

By default Mulgara stores its data in a folder relative to where it was started, instead this can be specified with a --path parameter.

Mulgara can be stopped using a command line interrupt, by pressing Control-C. Alternatively it can be run using nohup, and the following command can then be used to stop Mulgara:

The example datastore configuration below would provide a local MPTStore triplestore backed by Postgresql.

The Resource Index Search interface is exposed in a REST architectural style, providing a stateless query interface that accepts queries by value or by reference Fedora Relationships.

The query interface to the Resource Index currently supports two RDF query languages, iTQL (Mulgara-only), and SPO (Mulgara and MPTStore). Support for SPARQL is planned for a future release.

Demonstration objects that utilize the Resource Index are included in the Fedora distribution. Please see the Demonstrations documentation for more information.

Fedora Guide To Triples (and estimator for size of Resource Index)

To understand what triples are indexed in the Fedora Resource Index, and to estimate the size of your Mulgara triplestore consult document named Triples in the Resource Index.